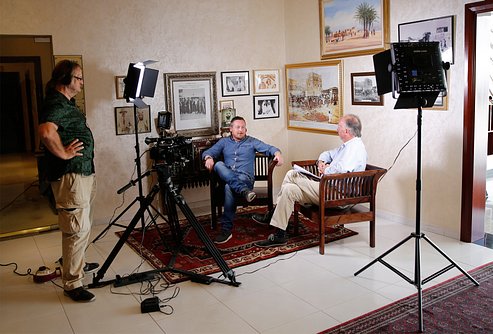 Of course, Arvy Events does many, many other great events too!

Arvy Events with Cliff Kirk can handle any film or video you have in mind, and our rates are very realistic, we work within YOUR BUDGET and give you 110% effort and attention to detail on every project.

Contact us today for a chat about what you need, Cliff can bring a whole film crew or just himself and a camera, whatever you require!

Here are some videos we shot here at Arvy Events!

“Broadcast is a multi faceted arena, that is why it is hard to find a truly well rounded Broadcast Consultant. Cliff know's the business back to front; from the Numbers to the ABC's of Production, through all the nuts and bolts of Engineering/Operations. Cliff excels in all these areas, so if it is holistic advice your seeking on the Business of Broadcast Cliff delivers. First on my list here in Dubai.”

Cliff Kirk is our British Partner, he has 30 years experience in the Film & Television Industry with major networks including BBC TV, Discovery Channel and MTV. He has also worked in Film at the giant MGM Pinewood Studios in England, home to all the James Bond 007 Films. Cliff has also worked as a Creative Director for the famous Saatchi & Saatchi Advertising Agency.

I am a British National, born near Cambridge just outside of London and educated at Cambridge University. When it came to choosing a career I was lucky enough to be offered TV production training at the prestigious BBC College in Wood Norton, England.  From there I started working with BBC TV and traveled the world for 20 years from London to Los Angeles, Moscow to Munich, Brisbane to Belize making documentaries, TV shows and the occasional films.

I have interviewed both an American President (Clinton) and a Russian President (Gorbachev) and had adventures deep in the jungles of Malaysia and spent six months filming the incredible Bolshoi Ballet in Russia. Along the way I have worked for many great organisations including BBC, Discovery Channel, MTV, Pinewood Studios, MGM and many others. I first came to the Middle East during the first gulf war and I finally settled here in Dubai, working initially with MBC Group and Prince Waleed.

Now I am a freelance Producer/Director with my own 4K edit suite and access to a wonderful film crew consisting of old BBC TV friends plus others from SKY and ABC, together we make a very professional production team with decades of experience between us.

Cliff brings to Arvy Events a full 4K film, TV, video and advertising production facility that can handle everything right up to TV commercials and feature films.

And we have a great deal of fun doing our events!

Here's another example of what we do, this was an international video workshop with BBC TV producer/Director Cliff Kirk

One of our earlier openings

Here is the showreelfrom our Video Producer Cliff kirk